The Haugen Hill House sits sandwiched in the big woods between Nordness and Haugen Hill Road, just south of Decorah.  This neighborhood was known as Washington Prairie, an area that was settled exclusively by Norwegians beginning in 1851.  Just about every farmstead in this area that was settled- say pre-1880 as a rule- had a log house.  But sadly only a handful survive today.  I think this is primarily due to historical land-use patterns (think agriculture).  Old buildings on the fertile prairie are more susceptible than those on hilly forested, marginal lands.

This house is really odd for a Norwegian built house.  Most of the Norwegian houses were expertly constructed, either by their soon-to-be occupants who had a solid notion of what a good house should look like, or by a team of professional carpenters.  This house isn’t either:  It’s extremely crude and hastily built.  Was it that its owners arrived in October and needed a shelter before winter?  Or maybe its owners thought, “Oh, what the hell, we’re going to upgrade soon, anyway.”  Maybe they couldn’t afford to hire a carpenter?  Who knows, but I rarely see anything as funky as this.

I say “Norwegian built” with confidence because this particular house exhibits a Norwegian plan and construction technique that date back more than a thousand years.  It’s a two room plan:  A main living room called the stue and a smaller entry room called the forstue. In antiquish Norwegian days, the forstue tended to be an unheated space- an entryway if you will- while the stue contained the major living space of the house.  Like the sval plan (see Bigler House post) the main staircase to the second floor was in the unheated forstue.

In the case of this house, the stue room is made of log walls roughly 16′ x 14′.  The top-most logs (the plates; running the 14′ length wall) extend outward 8′ past the ends of the stue room and are capped by upright 6″ x 6″ hewn posts, thus framing the outside dimensions of the 16′ x 8′ forstue. This particular method of construction with one room of log and the other of heavy timber was an extremely common choice for Norwegian settlers in Northeast Iowa.  I can think of probably a half a dozen other examples of this plan.

Since the house sits about a mile off the nearest road, it’s been saved from looters and vandals.  Look through the photos:  Isn’t the white cabinet great?  How about the wood cookstove that sunk into the basement?  Or the funky lime green trim?  The house is in pretty crappy shape, unfortunately.  Its roof was neglected too long, and now a huge torrent rains down the walls when it storms. 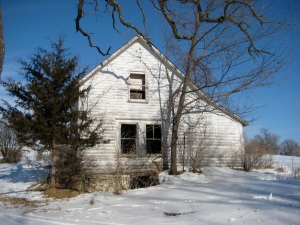 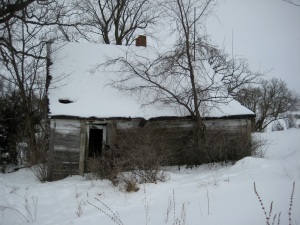 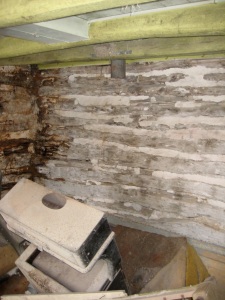 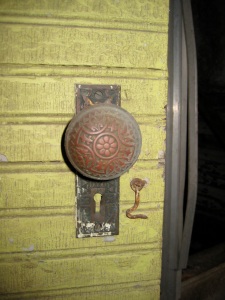