Meddrag is the Norwegian word used to describe the practice of scribing logs.  Scribing means to gauge out the bottom part of each log so that instead of curving downward in the shape of a “U”, the bottom of the log instead curves upward in the shape of an “n”.  Unlike their chinked and daubed North American counterparts, houses of Norway were constructed in the meddrag method.  This eliminated the need for mortar and wood chinking.

Many historians claim the reason meddrag didn’t catch hold amongst Scandinavian-born immigrants (Fins, Swedes, and Norwegians all used the scribed technique) was that they didn’t have the carpentry skills to execute such a detail.  Yes, that’s likely true, but I’d add a further twist.  Norwegians had softwoods to work with, while their northeastern Iowa counterparts dealt almost exclusively with hardwoods.  Unlike pine, oak is really difficult to shape.  In Minnesota and Wisconsin (roughly corresponding with the geographic distribution of softwood forests) there exist numerous examples of scribed log construction.  In Northeast Iowa, there are hardly any.

This is the only example of meddrag I’ve personally discovered.  There exists a one-story scribed log house at Vesterheim (located inside the old stone mill) that was found in Glenwood Township, Winneshiek County.  And apparently there existed a scribed granary in Washington Prairie, Springfield Township, Winneshiek County (now long gone).  But beyond those two, this is the only other example I know of.

This particular building sits in Dover Township, Fayette County, Iowa, about thirty miles south of Decorah.  The original one story log house was hopelessly added onto, altered, and chopped apart.  What’s left are parts of three walls and not much more.

From what I’ve gathered through poking around and opening up walls, the original house was one story in height and measured something like 15′ x 17′.  The species of tree used was eastern white pine.  Unlike true Norwegian scribed construction where the corner notches hang past the walls- commonly referred to as the double notch- this house has square notching.  I suspect the house was originally double notched, too, but the part of the notch that extends past the wall plane was likely lopped off when the building was sided.

Unfortunately, there isn’t much left to save.  The roof has completely failed, the entire forth wall was cut off, and numerous doors and windows were cut out of the other three.  This is such an incredibly rare and special house, and what it needs most is thorough documentation.  This house was definitely built by a professional carpenter, and it would be really interesting to scour the area to see if any other examples still exist. 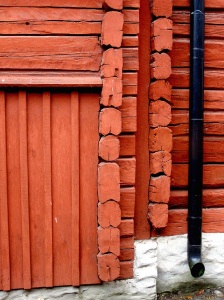 Thanks flickr: Norwegian meddrag or scribed log construction. Notice how the bottom sides were scooped out so they fit the natural curvature of the logs above. 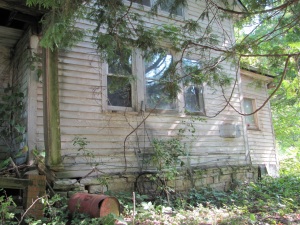 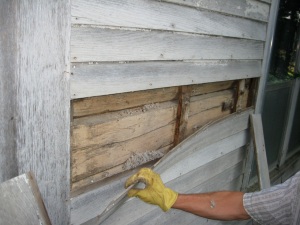 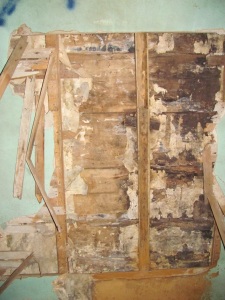 A solid log wall surface: no need for mortar and wood chinking 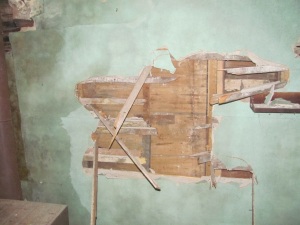 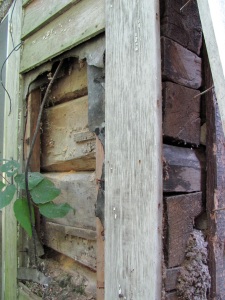 The corners are square notched. The original protruding double notches were most likely hacked off to make a flat wall surface when the house was sided. 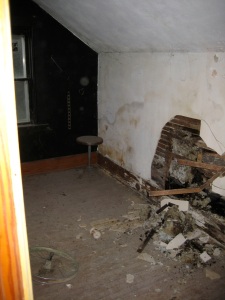 The logs stop at floor level of the second story. On top of that the walls are framed in dimensional lumber. 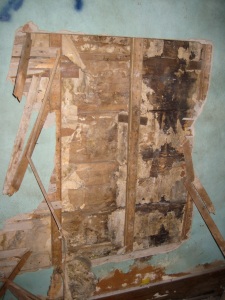