The log core as it existed when it was originally constructed. Two rooms, the plan is unusual, perhaps alluding to a Yankee or German builder.

Coursed platville with its characteristic blue hue, located on addition

The log core measures 16’x28′ and was built of mostly white pine with a few oak logs mixed in for fun. I wasn’t able to see the corner notching, but likely full dovetail. 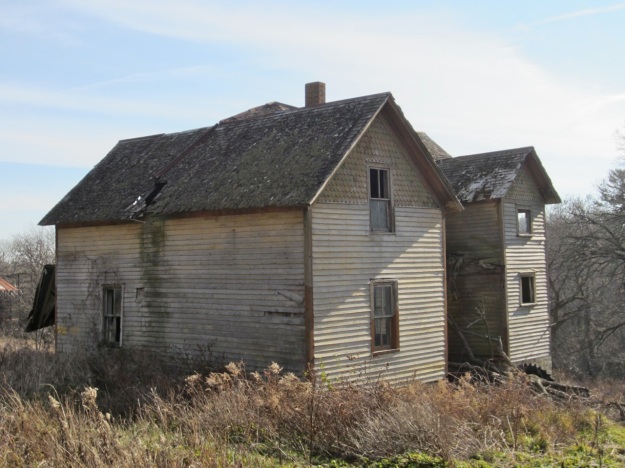 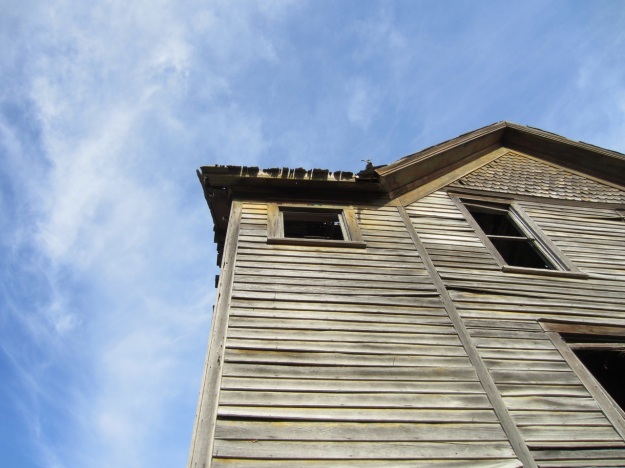 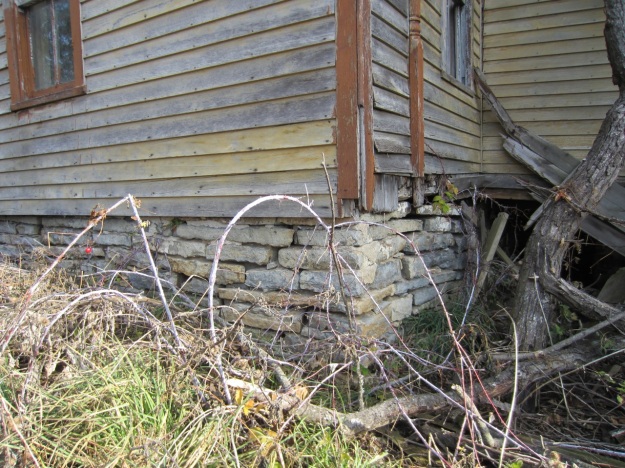 The foundation of both the original log building and the subsequent additions were made with platville limestone, a variety about 5″ thick and very rot resistant. 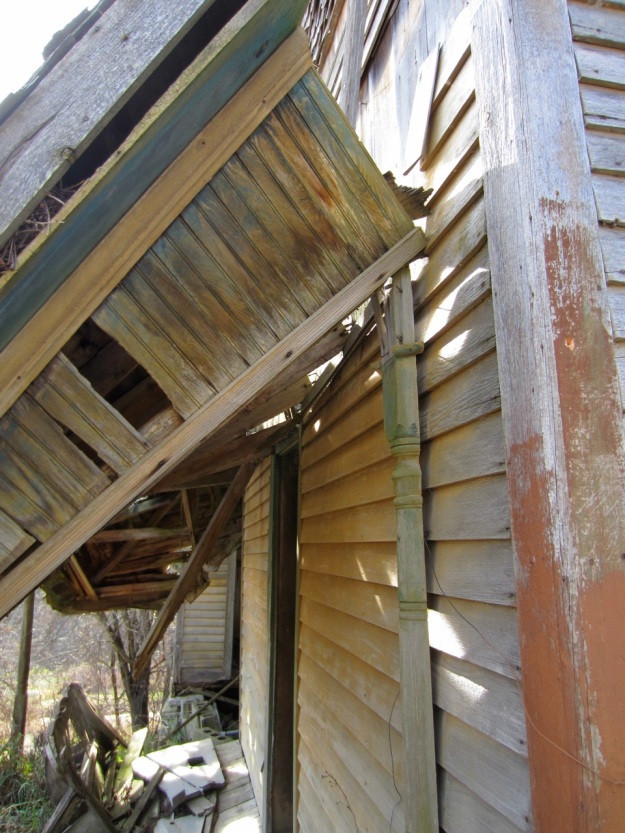 Fish scaling found on every gable

Looking south through original primary entrance to log house. The left doorway was carved out of an orignal window and is a later addition.

Most of the interior treatment has been removed, but a few pieces remain. Shown here is a doorway plinth.

Located in Norwegian settled Glenwood Township in eastern Winneshiek County, this little 14′ x 16′ house is almost totally intact.  It was replaced by a new house in about 1900 and converted into a shed.  The primary facade (with door and most likely side window) was chopped out and two swinging doors installed in their place.  The steeply pitched 12/12 roof is not original either, and replaces a much shallower 4/12 or 6/12 roof.  The standing seam metal is perhaps a hundred years old and still functions like it is new.  The logs are all oak and the corners are joined in a very shallow dovetail notch.

West and South elevations: The front door (south or long side of the building) was removed and two swinging doors installed in its place. The steeply pitched roof is not original and likely replaces a much shallower 4/12 or 6/12 roof. 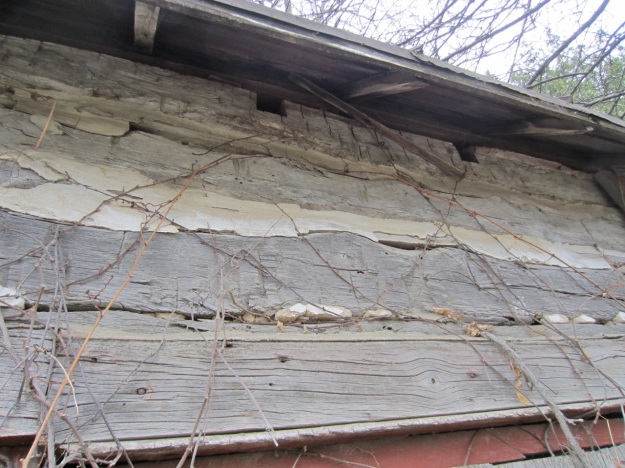 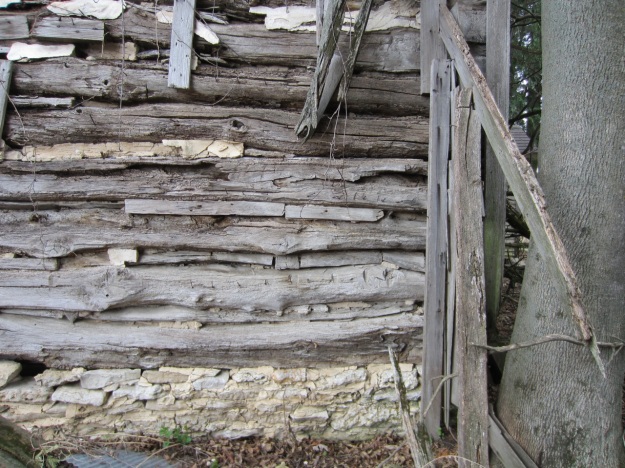 East-north corner. Despite looking crummy from decades of exposure to the weather, oak logs are incredibly rot resistant. Not a single log on this wall is structurally compromised. Notice the fieldstone foundation mortared together with pure lime mortar.

Southeast corner. Unfortunately a big chunk of the south wall was removed when it was made into a shed. Notice shallow dovetail notching. 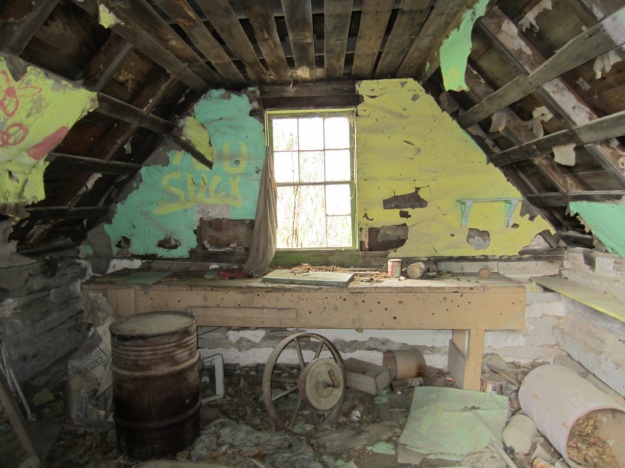 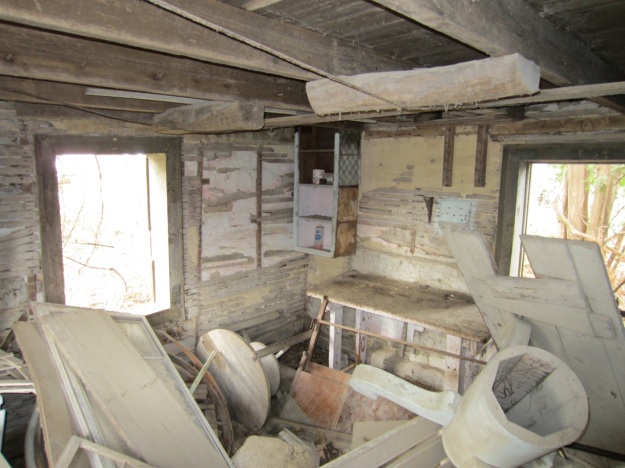 Below are photos of a barn I just finished rehabilitating.  Located in western Allamakee County, this small 12’x18′ building was built by Norwegian immigrants sometime in the latter decades of the 19th century.  Very similar to the Norwegian-inspired two and three room plans, this building consists of a main room, or stue, and an attached forstue.  The stue is log and the forstue heavy frame.  The upper level was a hay mow, and the bottom an animal shelter, likely for cattle and pigs, and later on for chickens and rabbits.

The building was a complete wreck when I found it, having been neglected for decades.  It had sunk a good foot into the ground, rotting out the bottom three to four courses.  I ended up replacing sixteen logs.  The roof was completely rotten, too.  About three quarters of the aspen pole rafters had rotted, and every last roof board was punky.  The whole roof had to come off and be reconstructed.  The building was originally set on small rocks set directly on the ground.  Realizing this wasn’t adequate, I had to elevate all four corners and dig and pour new corner piers.

The barn will be used as a bunkhouse for family vacations.

This project took about 260 hours to complete. 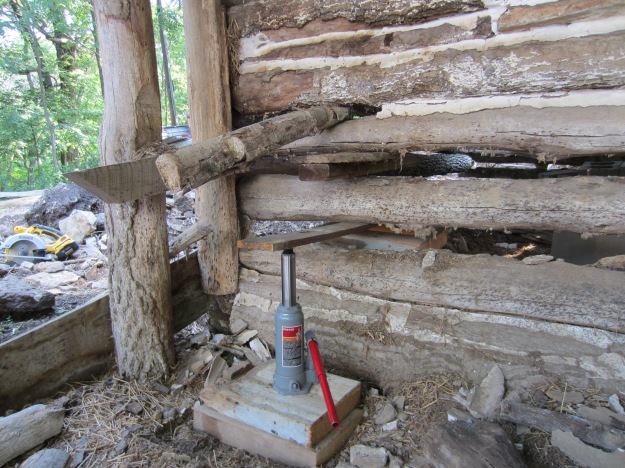 Jacking up the building is actually pretty easy. You just need to have a creative mind to envision how the building could fall apart and compensate accordingly. I use wood or cement block cribbing, bottle jacks, and heat tempered blades taken from the buckets of road graters and excavators. Build cribbing inside and out, shove the blade between the log courses, and start pumping. The bottle jacks are a pain, though, as they only raise about three inches, most of which is spent pushing the cribbing down into the earth. It becomes a matter of pumping, wedging, relieving the pressure, repositioning, and more pumping.

The posts that form the forstue had rotted at their base, causing the west third of the building to sluff off.

New dovetail joint. The logs were never stripped- good in that it provides a rough surface to mortar to, bad in that it encourages powder post beetle infestation. The joinery is shaped with my trusty hand axe.

The entire roof had to come off. The plate logs split at the junction of the forstue. I didn’t want to replace these pieces, though, so instead I connected them with metal plates.

The building was originally set on the dirt. Once all the logs had been replaced, I jacked all four corners up and dug holes and puddled them full of concrete. I then sat stones on the concrete and lowered the building down. 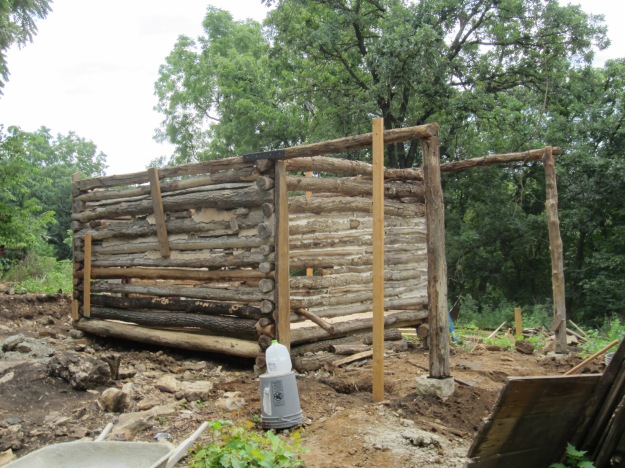 Naked: notice the way in which the forstue was framed. The plate logs extend outward and are capped by vertical posts. Getting this all aligned and set was tricky. The vertical posts rest on limestone mortared to the tops of concrete pours. I drilled holes into the limestone and epoxied in 6″ pieces of stainless steel rebar. I drilled holes into the bottom of the posts to accept the stainless steel treading and epoxied the whole thing together. The entire time I was devising this elaborate and unnecessary complex scheme, I kept going back to the idea of digging a hole and burying them in the ground like they were done originally…

Now we’re getting somewhere! I had to custom shape every aspen pole. I made the two outside sets and strung a line between. I then had to measure from that line down to a point on the plate log and shape every last rafter accordingly. Like the logs, I did this with a hand axe. And since the the aspen were highly irregular, I had to hew their upper face flat to accept the roof boards. A very long and tedious process! 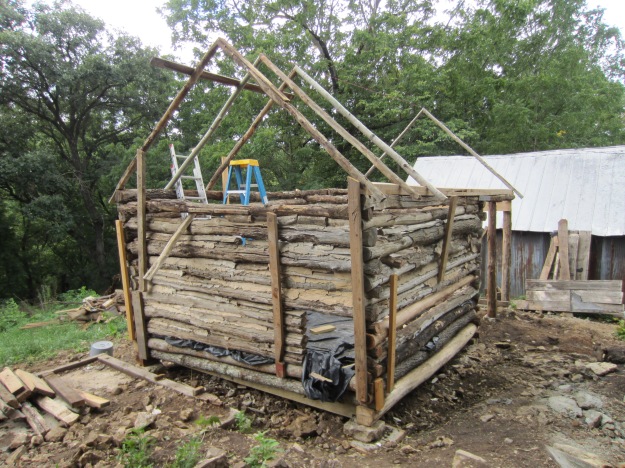 Finished product: I shingled the roof in first grade 16″ cedar shingles, the original roof treatment. Notice the scale treatment on the boards of the gable end. That was not original nor appropriate. But it looks cool!

The original building did not have window frames, windows, or shutters. The original gable end doors into the hay mow were converted into windows.

A beautiful setting! The original log house is background right. Unfortunately its roof wasn’t maintained, either, and is beyond salvage. It will be taken down next spring.

I have a habit of touting every new house I find as the best one yet.  But seriously, this one actually is.  I found it last weekend driving outside Spring Grove, Minnesota.  The house is impressive in many ways, if not entirely by its sheer size.  It measures 19.5′ x 36′ and has an interior square footage of 1,295.  It stands a full two stories in height and feels airy and substantial, both inside and out.

Most Norwegian-American buildings I’ve located are easily pigeon-holed into convenient building tradition classifications.  There’s the single room stue, the two and three room stuer, the stue with attached svalgang entry porch, the midtkammer or parstue, and many variations of each.  This particular house is the midtkammer or parstue plan.  This house type– both executed in frame construction and log– is quite rare here in North America, unlike its unexceptional occurrence in Norway.  Of the few hundred Norwegian-American log houses I’ve located throughout northeast Iowa and southeast Minnesota, only one other is a parstue.  See prior Guttebo House post.  Darrell Henning has located at least one in Wisconsin, and a frame construction example within the  town of Spring Grove.

Jerri Holan in Norwegian Wood: A Tradition of Building (a must have!) writes of the parstue (midtkammer) stue:

“The midtkammer stue was also common in eastern valleys, especially in Østerdal, but it can be found in some central valleys as well.  The midtkammer stuer were an an eighteenth-century development in Norway’s farmsteads, featuring an entrance in the middle of the building with a pantry behind it and a stue room to either side.  One was the “best” stue, akin to a parlor, and the other was for working and eating.  Later in the eighteenth century this latter room became the kitchen.  Originally, the type was a one-story structure, but as larger stuer became customary, it easily developed into two stories.  The later midtkammer houses were quite popular in eastern Norway, and from there they spread north, providing a basis for the trønderlåner houses characteristic of Trøndelag.”

The parstue plan is very similar to the classic American I-house, but differs in a few distinct ways.  Like the I-house, the parstue consists of a central passageway sandwiched between two roughly square shaped rooms.  The walls that divide the two rooms from the passageway are both log.  In the case of the Guttebo House, one was log and the other conventional stud framing.  The dwelling’s primary entrance is centered on the 36′ long side and enters into the middle passageway.  Upon entry into the house is the staircase to the second floor.  Behind the staircase is a pantry/closet, which would have been used in conjunction (functionally) with the working (kitchen) stue.  The closet would have been accessed through the working stue and not through the central passageway.  In the case of the Blexrud house, the closet/pantry was converted into a bathroom and its doorway modified to sit directly next to the staircase within the central passageway.  Parstue houses are easily identified by the presence of two chimneys, both centered around the interior walls comprising the center passageway.

Its rare to find an occupied house so nearly intact, especially one as significant as this.  It retains much of its original 19th century flare both inside and out.  The exterior is sheathed in wooden clapboard siding and retains its original eave and gable trim.  The windows are largely intact, too, including original twelve light sashes, interior window trim, and exterior pediment (triangular shaped) window hoods.  Much of the interior remains intact, too, including the staircase and 6″ tongue and groove pine floors, and (I’m sure) countless other features guised under later modernizations.  It’s an old house.  And I’m sure it’s really difficult to live in, but oh my god, is it beautiful. 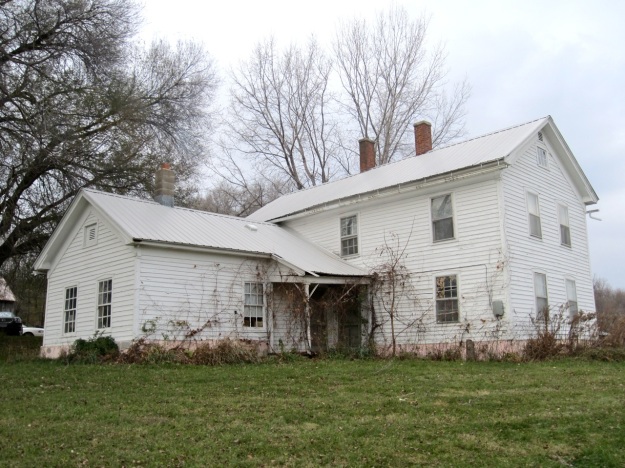 A large house measuring 19.5′ x 36′.  A parstue, the house has a central passageway sandwiched between two large rooms, one a kitchen and the other a more formal parlor-like space. The two interior walls that frame the center passageway are both log. 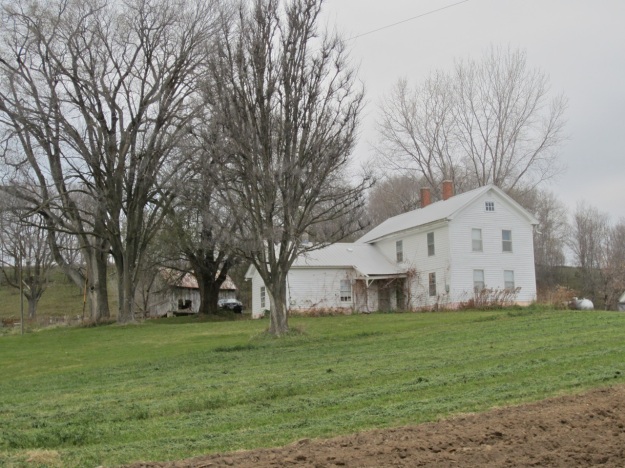 The dwelling sits on a working farm north of Spring Grove, Minnesota. There remains a garage, a granary, a storage shed, a machine shed, and the ruins of a barn. 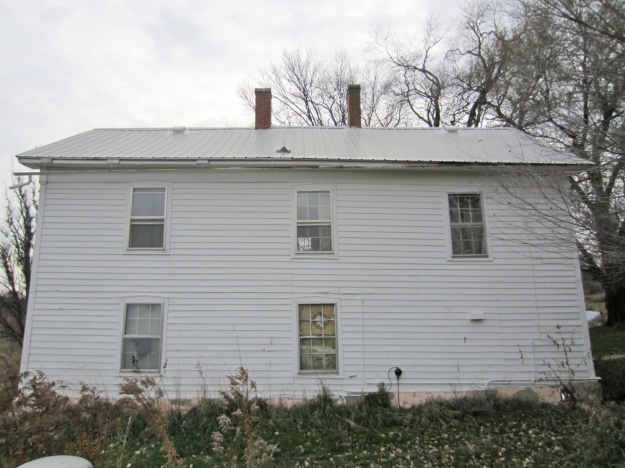 Rear, north elevation. There once existed a window on the bottom right. Notice the chimney placements- one serving each stue. 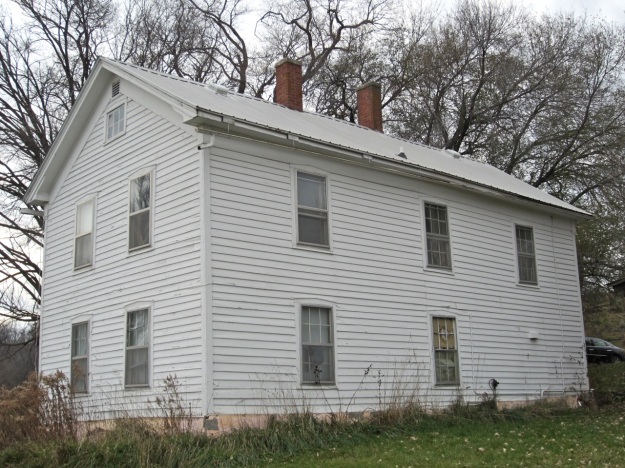 West elevation. The one story framed addition dates to about 1860-1880. 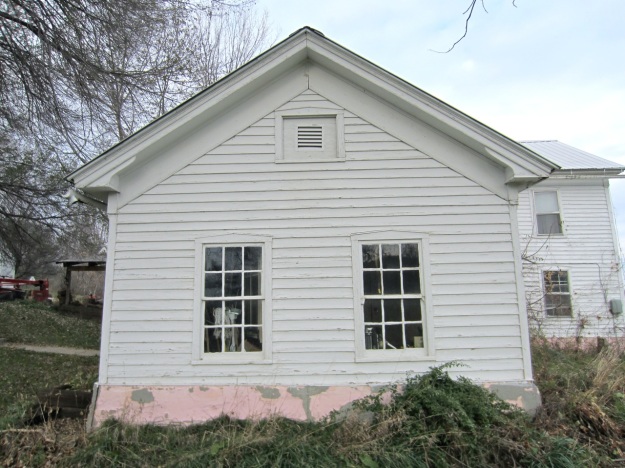 South elevation of one story framed addition. The addition is divided into three rooms: one large room abutting the original log house with an addition on its west side, and two small rooms on the south. The wall dividing the two small rooms is centered between the two windows, above. 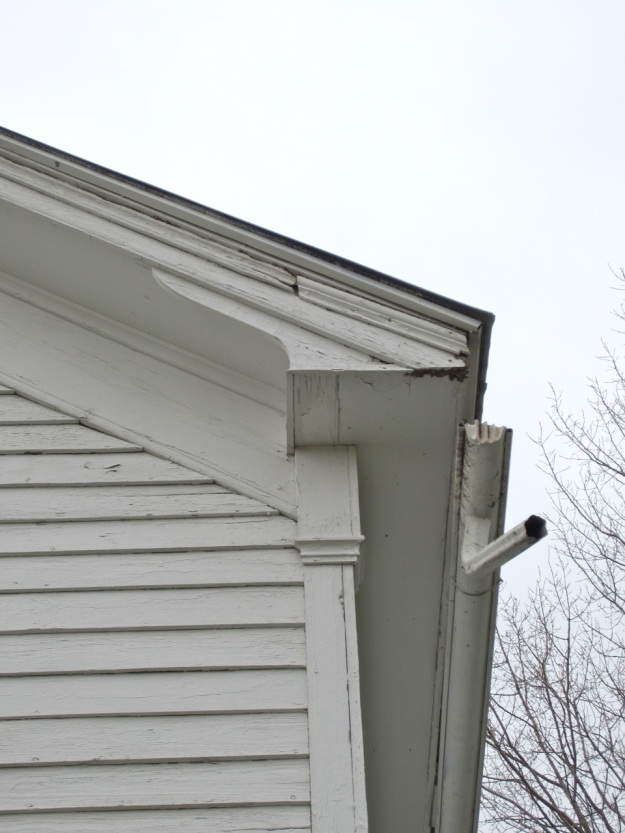 Floor joist system; shot taken from area of cellar entrance. Log joist (the butt timber facing viewer) supported atop a log plate. The closest log (near the top of the photo) is the sill log of the log wall. The foundation walls were constructed thick enough to carry both the log sill (the bottom of the log wall) as well as a plate log supporting the floor joist system. Nearly all houses I encounter have this or a variation of this system.